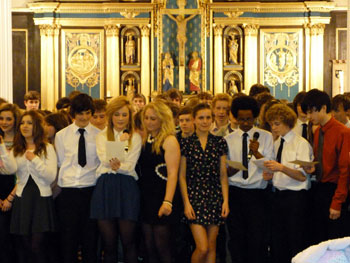 St Chad’s unique architecture and unsurpassed acoustics make it the ideal venue for plays, concerts and lectures in a semi-circular setting.  The photo on the right shows Year 10 students from Priory School performing a charity concert recently.  The church holds up to 1200 people including the gallery. We have central heating, a sound system and a hearing loop. Toilets are available, including one which is wheelchair accessible. The church verger is on hand to help and advise with your preparations. Please contact the church office for more information, availability and charges which include heating and use of organ or grand piano if needed. Events taking place in the near future are on our What’s On page

In recent years, the Shrewsbury Summer Season has used St.Chad’s for a range of events – including performances by the folk singer, Vin Garbutt; the World Quintet Kolsimcha, the Juan Martin Flamenco Ensemble and Sir Willard White’s tribute to Paul Robeson. In 2007 Puccini’s “La Boheme” was planned to be performed “al fresco” as an “Opera in the Square” as part of the Season but, due to inclement weather, the opera was quickly re-staged in St.Chad’s instead.

The centre-piece of a recent Darwin Festival was a classic of American theatre written by Jerome Lawrence and Robert E. Lee, “Inherit the Wind”. This play, inspired by the infamous Scopes ‘Monkey Trial’ of 1925 was performed by the Shropshire Drama Company During the run of the play, the church was transformed into a Dayton courtroom in the intense heat of Tennessee Summer. On the face of it, the play is a face-off between Darwinism and Creationists but the real theme explores freedom of thought and man’s natural thirst for knowledge. As the church where Darwin was baptised and whose mission statement is “Open Doors, Open Hearts, Open Minds”, we were privileged to be hosts to such a special theatrical event.

In the summer of 2007, the town of Shrewsbury achieved remarkable victories for the UK in two prestigious international floral community competitions: Gold in the European Entente Florale Competition and winner of the International Challenge in the Communities in Bloom Competition. Floral arrangements depicting each of the Judges’ home countries were on display in St Chad’s Church and were scrutinised by the team of judges for the European Entente Florale Competition. The judges commented: “……. green networks throughout the town and balanced floral displays in the town centre brilliantly finished with the horticultural finale in the Dingle and at St Chad’s Church …. were outstanding. The Jury awards a Gold Medal.”

The church has also been used for such events as the Discover Shropshire Project where local schoolchildren have been able to learn about their county. This was arranged by Shropshire Council.