St Chad’s relates informally with other Christian denominations as well as with groups and individuals from other faith traditions. We are committed to working collaboratively with all who seek truth and wish to build communities of reconciliation, inclusivity and worth – enriched by diversity and unthreatened by change.

Our closest partners in faith are St Alkmund’s (photo on left) and St Mary’s (photo on right). In the same benefice and with the same vicar is St Alkmund’s Church right in the heart of medieval Shrewsbury, only five minutes walk from our own building. The centre photo shows the Palm Sunday procession from St Chad’s preparing to enter St Alkmund’s to complete a joint Eucharist Service.

Now redundant and cared for by the Churches Conservation Trust, St Mary’s Church does host a few services of worship each year. 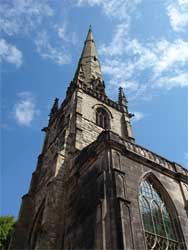 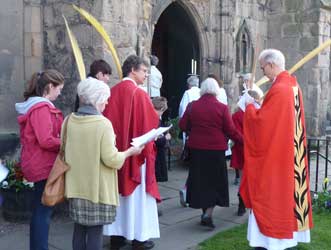 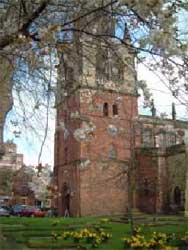 Shrewsbury Roman Catholic Cathedral is geographically very close to St Chad’s and the two places of worship have a strong relationship with each other. Several of our congregation are active members of the ecumenical group, Churches Together in Shrewsbury and attend regular meetings.

In addition we are represented on the Shrewsbury Inter-faith Forum which meets monthly on the second Tuesday at 1pm at the United Reformed Church, Shrewsbury. Included in the participants are people from the following faith backgrounds: Baha’is, Buddhists, Christians, Hindus, Jews and Muslims. Representatives from Shropshire Council, West Mercia Police and South Staffordshire and Shropshire Healthcare NHS Foundation Trust also attend meetings. Anyone who wishes to promote peace and harmony between people through dialogue is welcome to this Forum.

St Chad’s is in the Shrewsbury Deanery of the Diocese of Lichfield in the Church of England We have four elected representatives on the Deanery Synod who are ex-officio members of St Chad’s PCC. Two of these are currently elected from the Deanery Synod to serve on the Diocesan Synod.