Interactive Plan of the Church

Our grateful thanks to Robin Jukes-Hughes who donated all photographs on this page as well as others elsewhere on the site. RJL Smith & Associates Much Wenlock and also the Shrewsbury Chronicle have also kindly allowed us to use a few photographs. 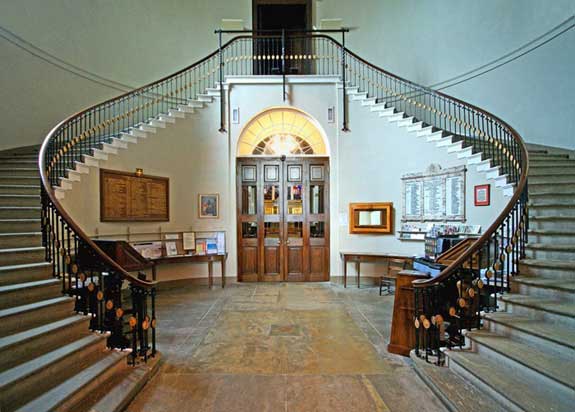 Two arms of a fine staircase sweep up to the gallery. The rail is of elegant Shropshire ironwork. 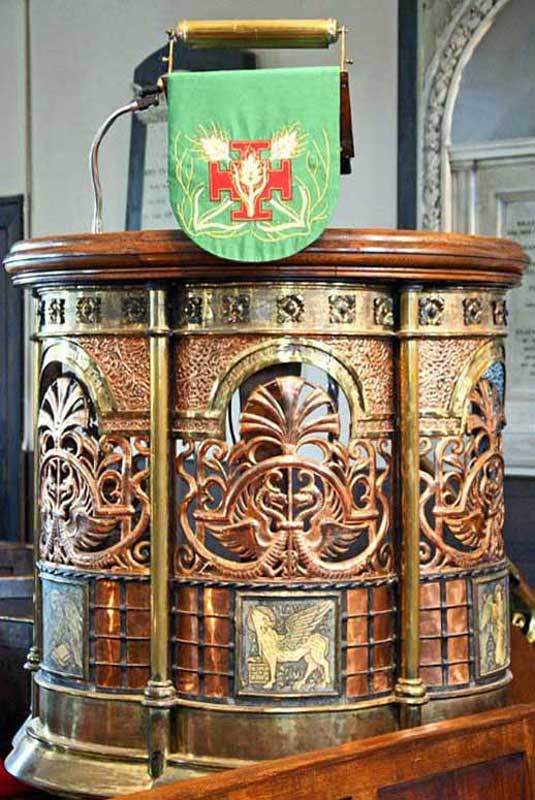 The Arts and Crafts style pulpit in copper and brass was given by Mrs Morris in 1892. 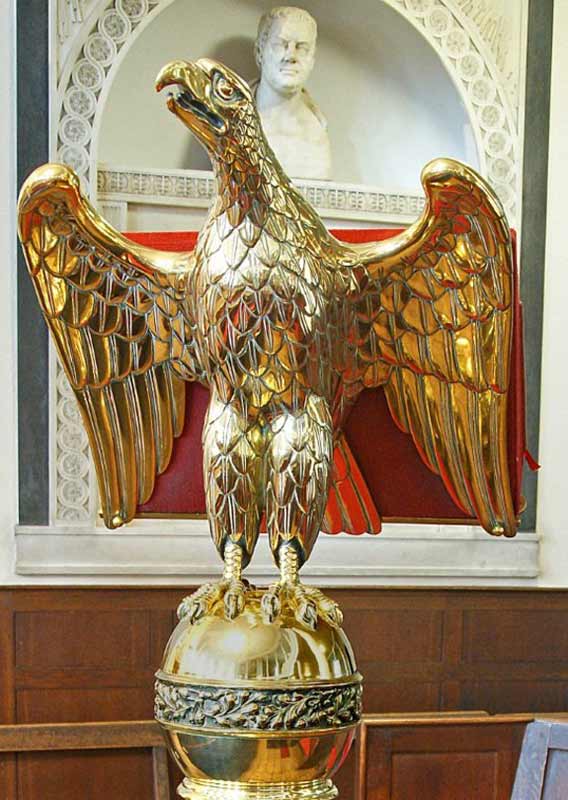 The eagle lectern was given in 1888 in memory of Richard Hughes. 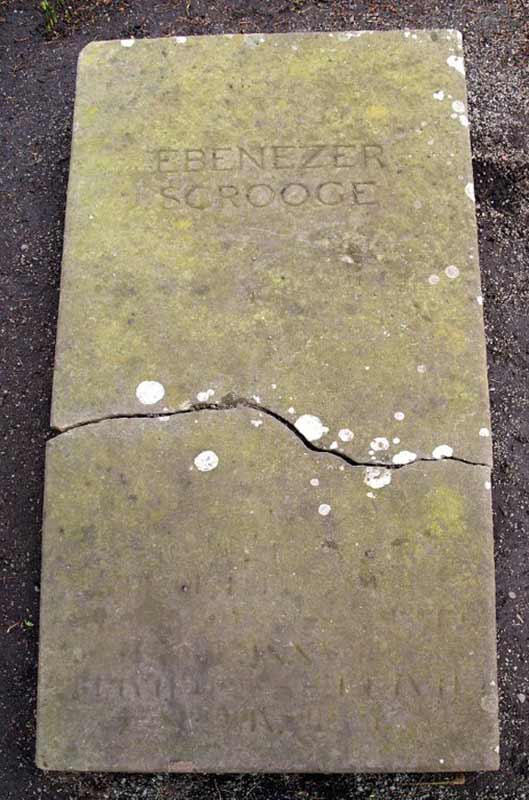 This gravestone was used during the filming of the 1984 film ‘A Christmas Carol’ and is still in the church yard.

Of more historical significance in the graveyard is the grave of Charles Bage, designer of the first ever iron framed building, the Ditherington Flax Mill, in Shrewsbury, built at the end of the 18th century. The technology that Bage developed makes him a pioneer of what would become modern sky scraper technology. 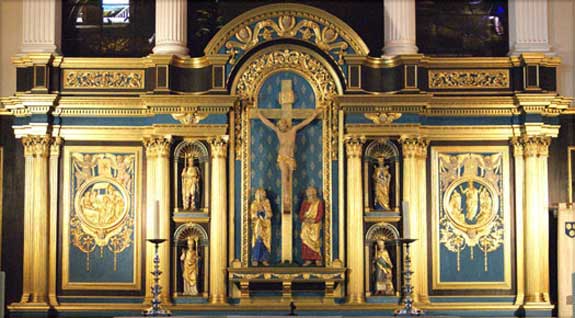 This decorative screen is above and behind the altar. 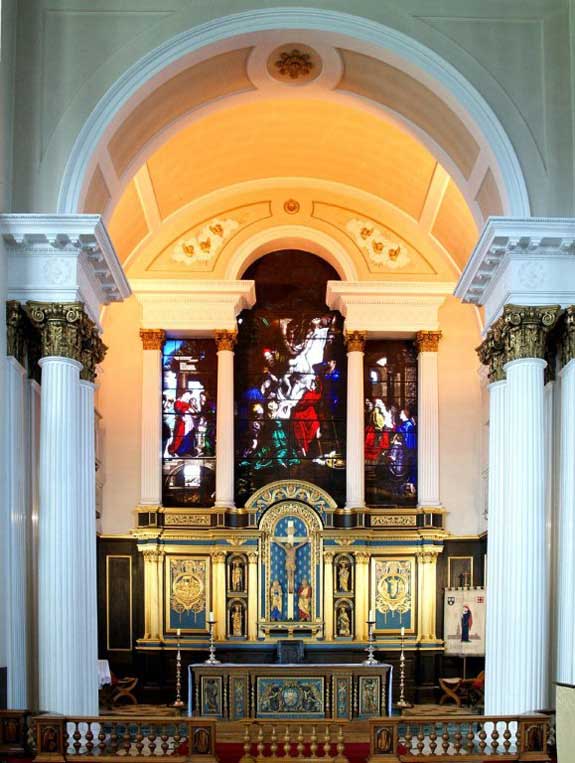 This is the most sacred part of the church with reredos, carved altar and wainscot given as a war memorial to the fallen. The stained glass window is a copy of Ruben’s “Descent from the Cross” in Antwerp cathedral.

The church has two Robert Thompson “Mouseman” stools which are found in the Sanctuary. 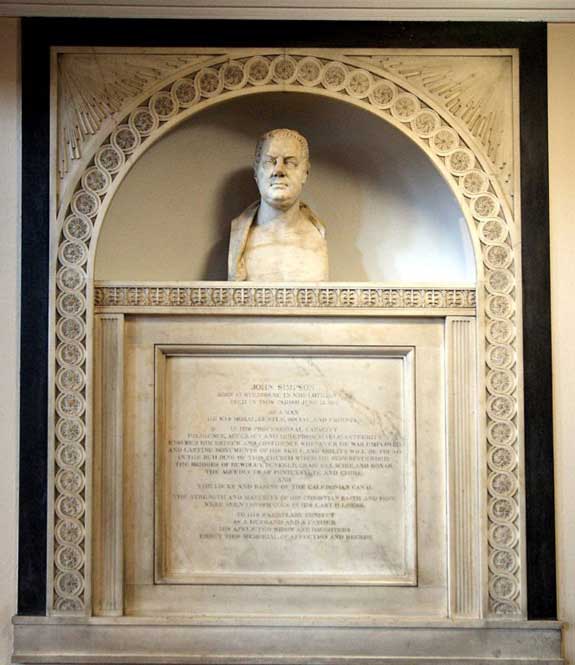 John Simpson superintended the construction of this Church for George Stueart. He was a friend of Thomas Telford and worked on many of his projects. 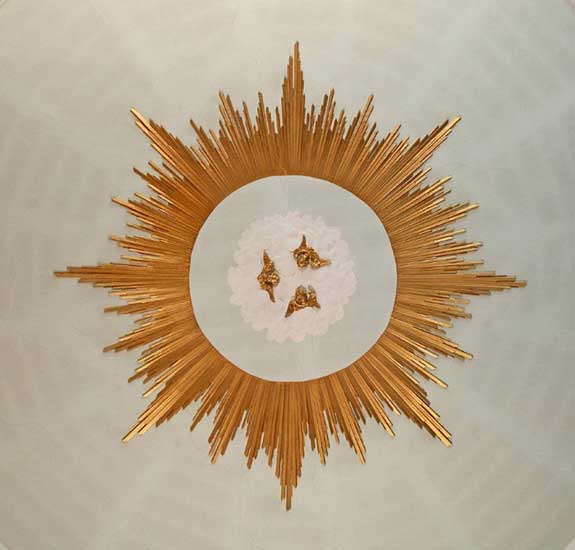 Close up of Chancel Ceiling

The central detail of this magnificent ceiling: golden glory with cherubs in stucco. 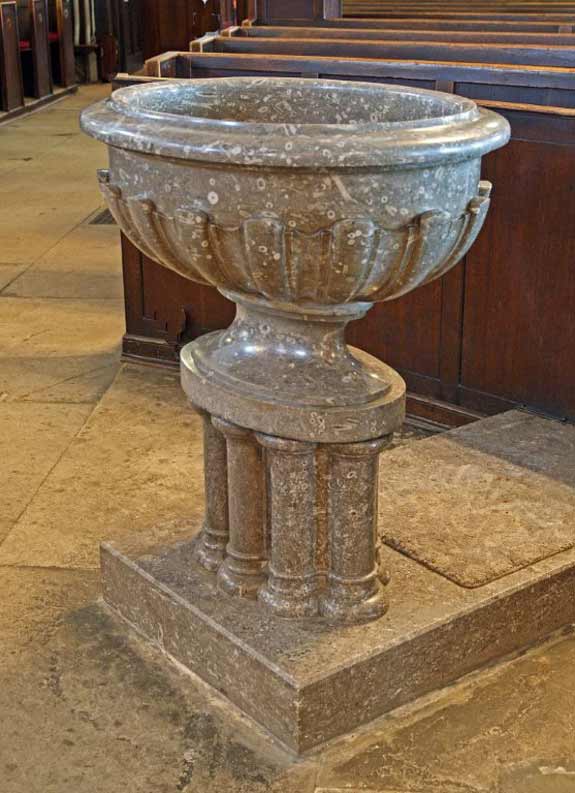 The oval font was bought in 1843 and replaced the silver christening basin which was used to baptise Charles Darwin in 1809. 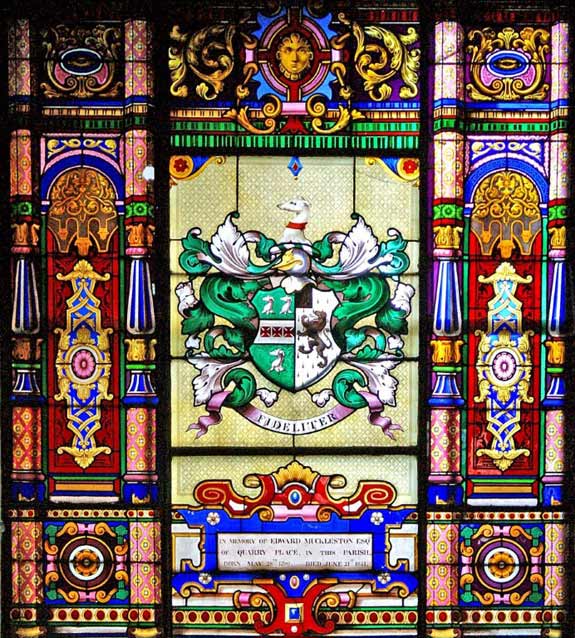 The Muckleston family had a long association with St Chad’s (old and new) from the 17th century. This window is in memory of Edward Muckleston who lived during the first half of the 19th Century. 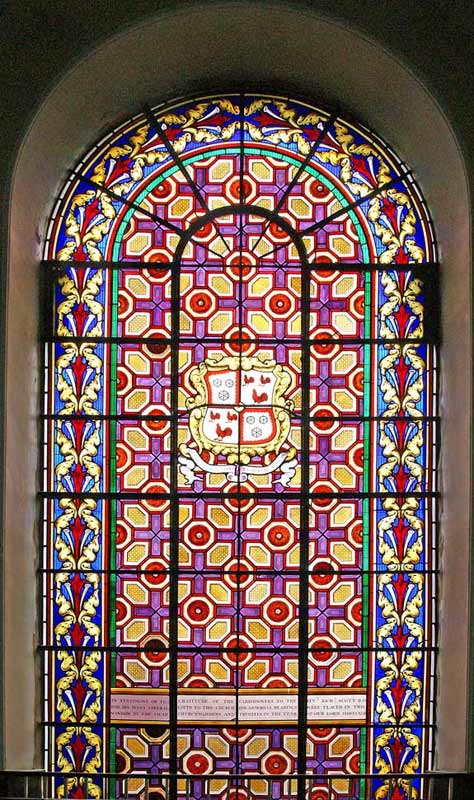 This window bears the armorial bearings of Reverend Richard Scott in gratitude for his gift of the Sanctuary window. 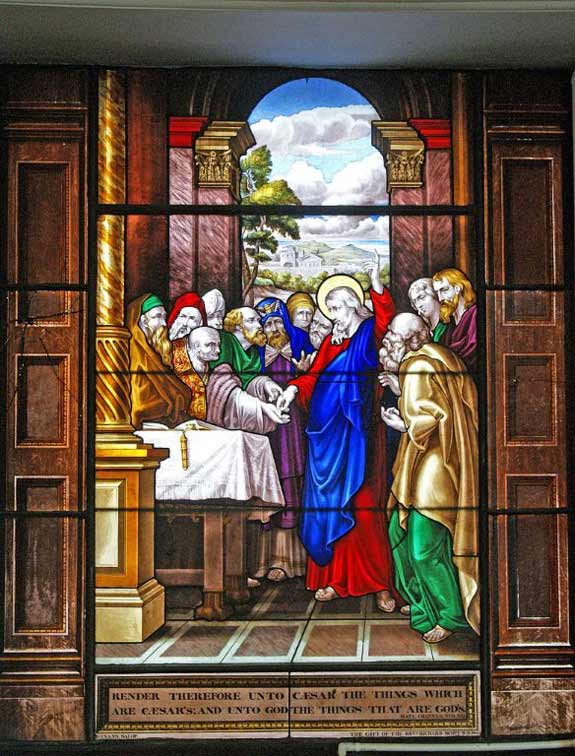 Render unto Caesar the things that are Caesar’s

One of four windows by Evans and donated by the Reverend Richard Scott. 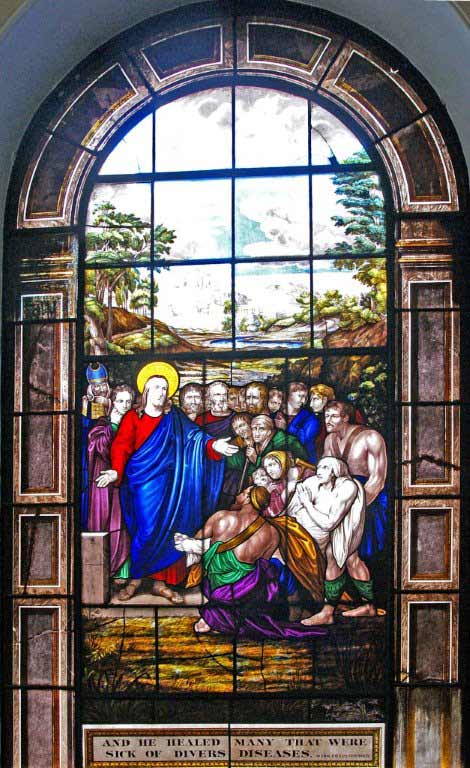 And He healed many that were sick of diverse diseases

The organ was built by Norman and Beard in 1904 and has recently (2011) been substantially renovated by Harrison and Harrison. 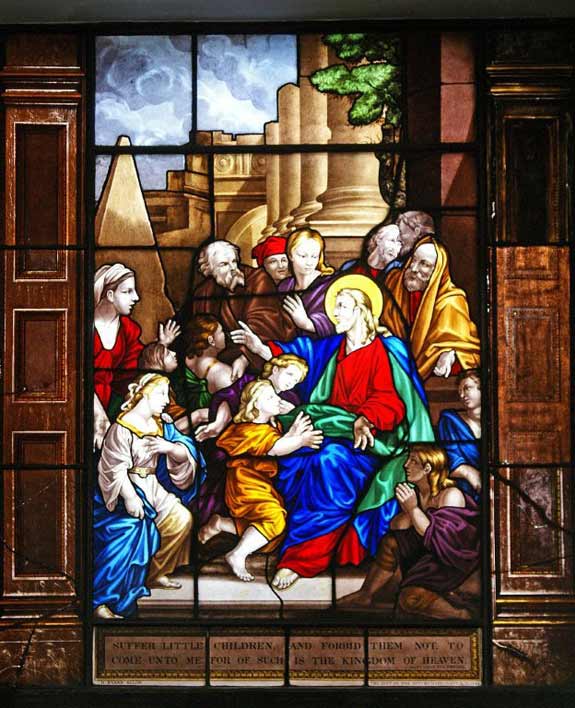 Suffer Little Children and forbid them not

One of four windows by Evans and donated by the Reverend Richard Scott. This one depicting the scene in Matthew19 v 14 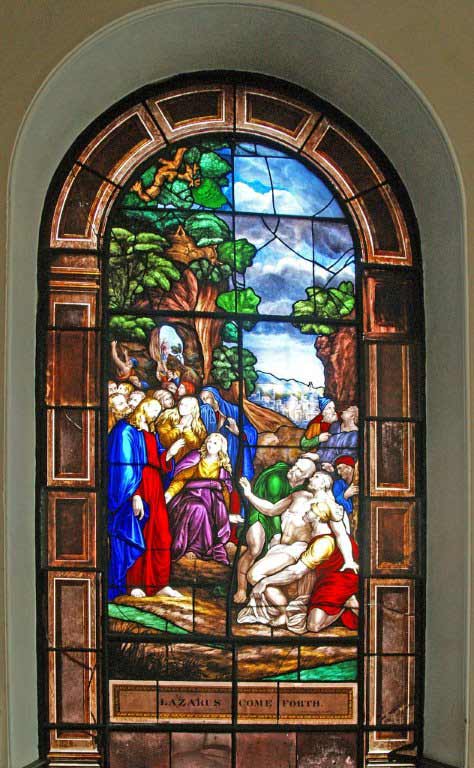 One of four windows by Evans and donated by the Reverend Richard Scott. 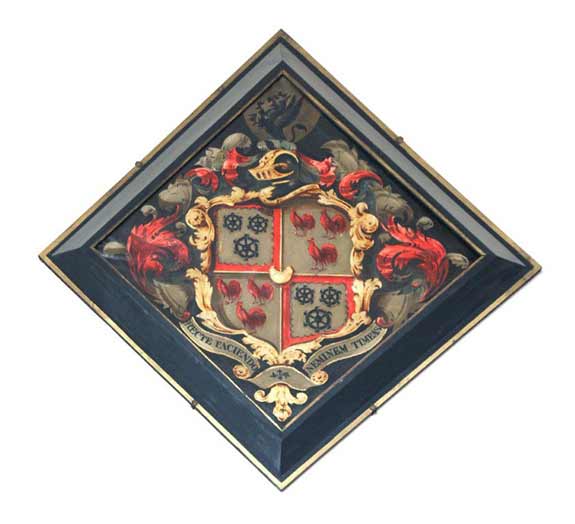 One of 21 distinguished 19th century hatchments. This one depicts the arms of the Reverend Richard Scott BD, it was carried in his funeral procession to the church before being hung here. 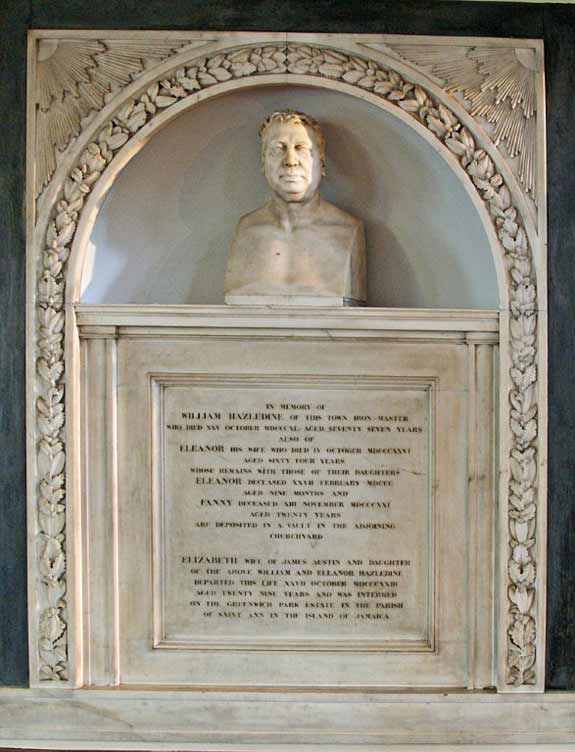 William Hazeldine was a local iron master responsible for the iron work on many of Telford’s projects and was a friend of Thomas Telford. 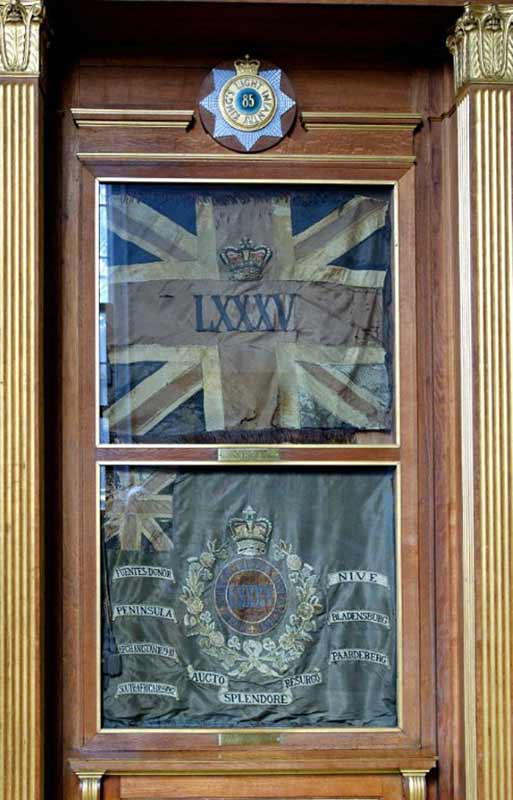 A number of Colours of the local regiment, the Corps of the Kings Shropshire Light Infantry are displayed in St Aidan’s Chapel. 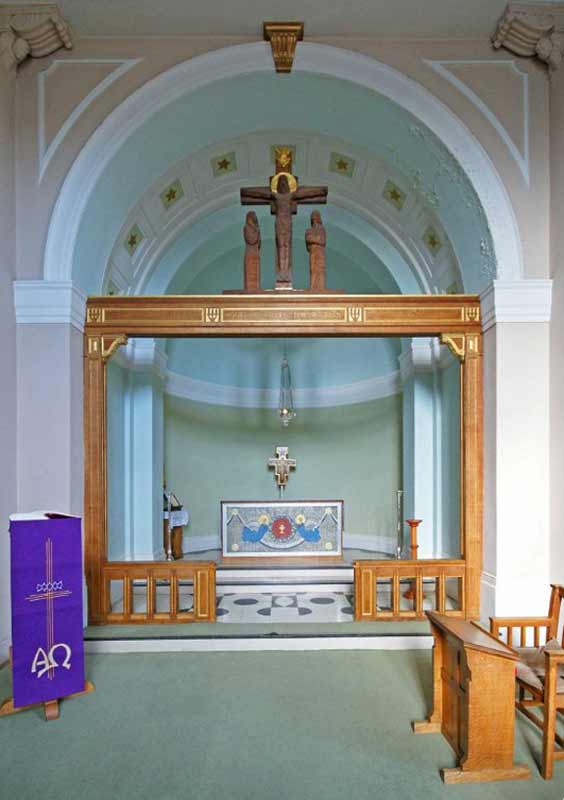 chapel is for the

the Corps of the 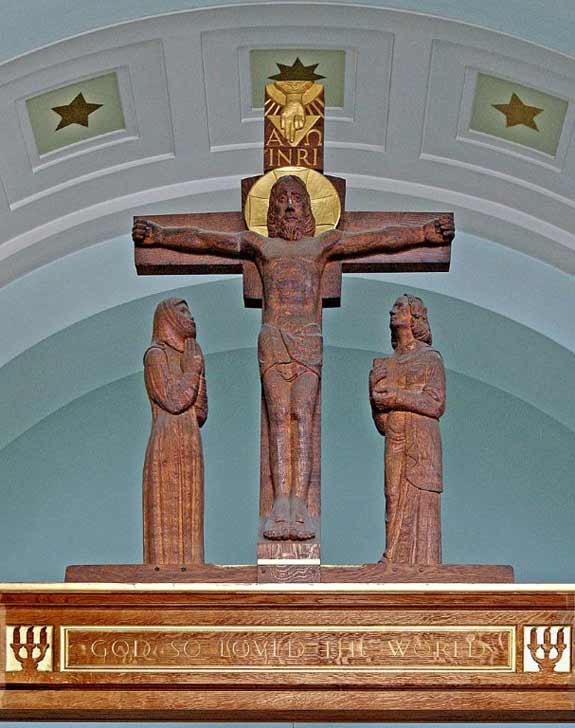 This detailed wooden carving of the crucifixion is on the Chapel’s Holy Rood.

St Chad was the first Bishop of Lichfield, shown here with his crozier and a bible. He is often depicted holding Lichfield Cathedral (with its three spires) in his arms. 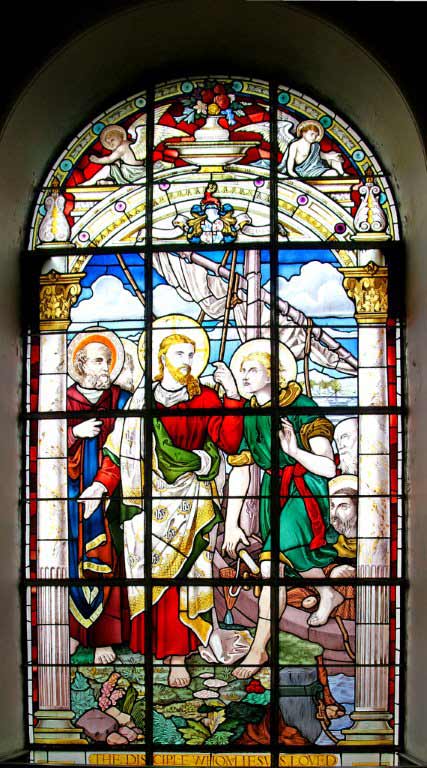 The Disciple whom Jesus loved

One of four windows by Evans and donated by the Reverend Richard Scott. This one depicting the “disciple whom Jesus loved” mentioned several times (exclusively) in John’s gospel. 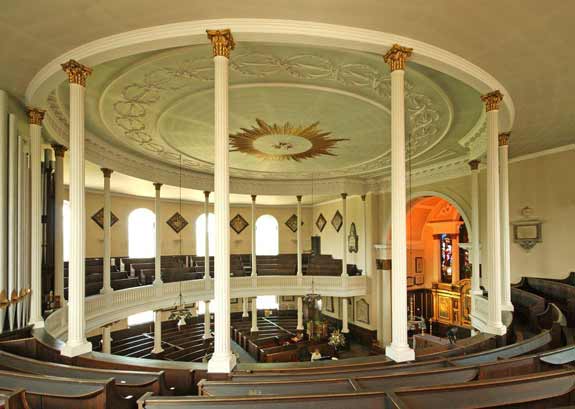 View from the gallery

Taken from the gallery, this view shows the ceiling in all its glory and gives an idea of the space in the vast circular nave. 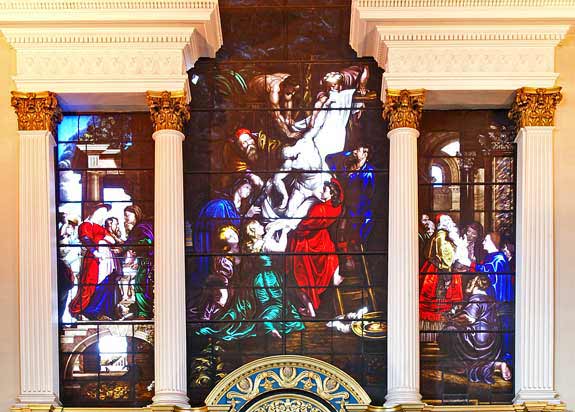 The central section depicts disciples removing the body of Jesus from the cross, whilst in the left light is the Visitation of Mary to Elizabeth and in the right light is the presentation of the infant Jesus at the temple.