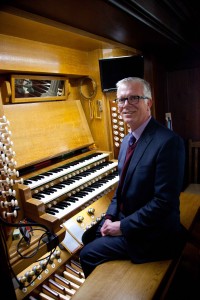 Anthony Pinel was born in Sutton Coldfield and graduated from Huddersfield. After a year as Organ Scholar of Birmingham Cathedral he was appointed Assistant Organist of Bristol Cathedral where he accompanied seven Choral Services each week in addition to making several recordings with the Cathedral Choir and undertaking tours of Germany and the USA. He also took part in many live broadcasts of Choral Evensong on Radio 3 and was conductor of Bristol Cathedral Chamber Choir. After a period as Acting Organist and Master of the Choristers of Bristol Cathedral, Anthony moved to St. Mary Redcliffe, Bristol, described by Queen Elizabeth I as ‘the fairest and godliest Parish Church’. Under his direction the choir produced two CDs, were involved in many broadcasts on local and national radio and television and made a trip to the USA in 2001. He was Assistant Director of the City of Bristol Choir and taught the piano and organ at Clifton College and Colston’s Collegiate School. After 3 years at St. Peter’s Church, Morristown, New Jersey, USA (during which he gave recitals at The Riverside Church, New York, Princeton University Chapel and St. Mary the Virgin, New York).

Anthony Pinel returned to England as Organist and Master of the Choristers of Grimsby Parish Church, now Grimsby Minster, where he directed the five Choral Services each week. He was also Assistant Director of Music of Louth Choral Society and Grimsby Bach Choir and holds the Associate Diplomas of the Royal College of Music and the Royal College of Organists. 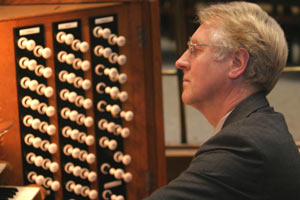 Richard joined the St Chad’s team in 2007; he accompanies most of the major services, organises the 45 weekly Friday lunch-hour concerts each year and gives recitals, including the complete organ works of J.S.Bach in 2010 and 2014, Messiaen’s La Nativité and Dupré’s Le Chemin de la Croix.

Richard studied organ with David Willcocks, gaining both ARCO and FRCO diplomas in the same year, and both with prizes. His career has been largely in teaching, first at The Edinburgh Academy, and then as Director of Music at Daniel Stewart’s and Melville College Edinburgh (1975 – 80), The Leys School Cambridge (1980 – 85), and Harrow School (1985 – 2005). He was also Assistant Organist at St Mary’s Episcopal Cathedral Edinburgh and subsequently Organist at St John’s, Princes Street, Edinburgh. He has given recitals all over the UK, and also in Germany and the USA.